When attempting to ETT (edit to tape) to a Betacam SP deck, you might find that video records to tape but no audio records to tape. However if you crash record to the deck, both audio and video are recorded to tape.

Why would I have more than 2 channels of audio output?

Prior to Final Cut Pro 5.0 and QuickTime 7.0, it was only possible to capture 2 channels of audio in one pass. Consequently there was no situation where one might accidentally capture multiple channels of audio which could cause a problem during ETT.

If unwanted blank audio channels are captured, then Final Cut Pro will be outputting 8 or 12 audio channels even if the deck only supports 2 or 4 channels. This will cause an audio problem during ETT to a Betacam SP.

This is quick and easy to resolve. One of the great features introduced with Final Cut Pro 5.x is support for multichannel audio on capture. In previous versions of Final Cut Pro, you could only capture 2 channels in one pass. That is why you may now see multiple channels of audio upon capture compared with only 2 channels in the past.

In the Log & Capture window, click on the Clip Settings tab and then look at the audio channels. Click on the green speaker icons next to the audio channels you wish to disable. They should change from bright green to dull green to indicate they have been disabled. In the accompanying picture, you can see that only channels 1&2 and 7&8 are enabled. All other channels are disabled. 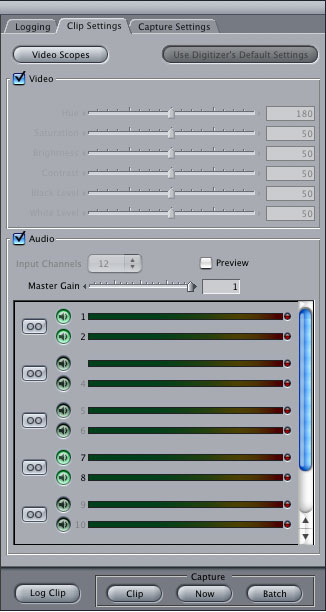 This setting should be retained when performing future captures, ie now that you have made this change, you should not need to change it again for future stereo captures.

The only time you will need to revisit this setting is if you want to enable more channels of audio capture or if you (re)install new DeckLink or Multibridge drivers. When you install new Blackmagic drivers, the Final Cut Pro preferences file is deliberately deleted. If you do update or reinstall your Blackmagic drivers, don't forget to go re-implement the 2 channel setting, as described above, if you only want to capture 2 channels of audio.